A SELECTION OF TEXTS THAT I TRANSLATED FOR CHILEAN POET NICANOR PARRA’S SHOW “OBRAS PUBLICAS” – FROM MAY 30, 2013 THROUGH SEPTEMBER 1, 2013 AT THE NATIONAL LIBRARY IN MADRID, SPAIN 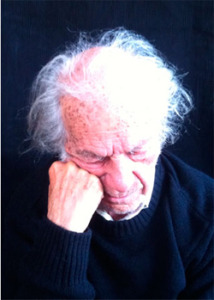 Here are images from the show published by the National Library.

The critical text below is by Spanish literary critic Ignacio Echavarría, and the original poems and prose by Parra and others are indicated. 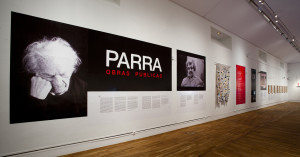 Nicanor Parra has spent more than half a century subverting all the established notions of what is understood as poetry and what characteristics distinguish a poet. From the time he burst on the Chilean poetry scene at the beginning of the 1950s, antipoetry has not relented in its radical transformation of Spanish language poetry’s horizons and reorientation of its paths. Much more than a vanguardism, much more than a movement or a school, antipoetry is a long journey back to the source of poetic expression itself, which is none other than everyday speech, the speech of the tribe. This return, however, does not entail a regression, but rather the opposite: it is an incessant search for felicitous and self-sufficient linguistic configurations. Antipoetry nourishes itself endlessly on colloquial and street language, and also on the language of newspapers, marketing slogans, political sound bites, and graffiti. And there is more: antipoetry daringly explores the intersections of image and word, and proposes surprising new encounters between randomly chosen objects and phrases, encounters that release unexpected energy.

Far from limiting itself to any kind of formula, antipoetry has never ceased to stretch out in multiple directions, pointing to the currents that 21st-century art and poetry must navigate. This exhibition proposes, for the first time, a panoramic approach to Parra’s antipoetry and the successive stages of its development, which allows for an appreciation of the diverse ways in which antipoetry adapts itself to confront the crises in hegemonic discourses and narratives. This approach additionally appreciates the myriad modes for solidifying the impulse to transcend conventional formats for transmitting poetic experience by way of techniques and strategies that interact with the visual and promote an active reader/spectator who can dialogue with the work.

The exhibition’s arc is held together by the audiovisual stations that “talk to” the exhibited work, and, in addition to offering insights into Nicanor Parra’s artistic trajectory and persona, give us the opportunity to listen to some of the most celebrated antipoems recited in his own voice. In one of them, published 50 years ago, Parra compares antipoetry to a roller coaster: “Climb aboard, if you like,” he says. “Of course I take no responsibility if you arrive / bleeding from your mouth and nose.”

You’ve all been warned.

Nicanor Parra is the oldest of eight siblings. His father, also named Nicanor, was a school teacher who had a great affinity for music, drink, and bohemian life. His mother, Clara Sandoval, was the one who kept the family going as she worked tirelessly at her sewing machine. By using scraps from all kinds of clothes, she made very colorful curtains and quilts for her household. It is not difficult to see his mother’s confections as distant precursors to antipoetry and how it engages with language. If, on the one hand, his father deeply influenced Nicanor and his siblings — several of whom pursued the arts — his mother’s presence, much more subtle and continuous, has become increasingly palpable over time in the development of Parra’s antipoetry, where her name is invoked with mounting frequency.

“My mother was a woman who was pragmatic above all else, who had hardly attended school and who barely scrawled a little; she was practically illiterate, but possessed a strong intuition, a great sense of nature, and a great sense of objects and domestic tasks. She was a kind of unmovable rock. Her children’s lives, all of them, were organized in large part around her.”

What a woman this Clara Sandoval

every working day of the year

if you don’t see her at her machine

– the family needs food on the table –

it means that she is peeling potatoes

or washing the infinite diapers

she knows that she married a bohemian

her health is her only problem:

when she threads the needle

she scrunches her eyes to see a little

and those are a lady’s maladies…

but she doesn’t lose her patience:

keep coming from her magical hands

transformed into clouds of cheap pants

heading towards the four cardinal points

you’re not allowed to rest on your laurels

the more suffering there is

the more energy to stay on the wheel

so that Tito can go to high school

so that Violeta doesn’t die

and she still has time to cry

this young and attractive widow

who will enter history

and she still has time to pray

Nothing + great than poem XX

Little is gained by spitting upwards

The crushing figure of Pablo Neruda dominated everything when Parra emerged on the Chilean poetry scene. Antipoetry was, among other things, a way of detaching from Neruda’s influence by exploring completely new, if not opposite, paths. Parra’s and Neruda’s exchanges were always based on sincere recognition and mutual reticence. Neruda welcomed the publication of Poemas y antipoemas with warm approval in 1954. And it was Nicanor Parra whose job it was to read the welcome speech when Pablo Neruda was invited to join the University of Chile as an academic member in 1962. In the opening of his speech, Parra declared: “There are two ways of refuting Neruda: one is by not reading him and the other is by reading him in bad faith. I have tried both and neither has given me results.”

The class photo of the humanities students from the National Boarding School Barros Arana (INBA) in 1932, the same year that Nicanor Parra enrolled thanks to a scholarship provided by the League of Poor Students. Counting from left to right, Parra is the second student in the first row. Among his classmates and teachers are Ramiro Contreras, Jorge Millas and Carlos Pedraza, with whom he initiated a close friendship. His days at INBA decisively marked Parra, who has pleasant memories from his time there. The phrase comprising this “visual artifact” — “We All Would Be Queens” — responds with emotional irony to the title of a celebrated and long poem by Gabriela Mistral, one of the great voices of Chilean poetry for whom Parra has felt an open admiration since his youth.

WE ALL WOULD BE QUEENS

We all would be queens,

of four realms on the sea:

and Lucila with Rosalie.

In the Valley of Elqui, cinched

by one hundred mountains or more,

burn in red and saffron tones.

We said it when we were drunk,

and we lived it as real as can be,

that we all would be queens

and we would reach the sea.

During the interwar period, Pablo Neruda’s great rival in Chile’s “literary battle” was Vicente Huidobro, whose figure has become the epitome of the poetic vanguard. Nicanor Parra gave a personal homage to Huidobro and his oeuvre in a speech marking the centenary of Huidobro’s birth in 1993. In this lab work, carried out around the same time, Parra ironizes the legend maintaining that Huidobro, upon his return from Europe — where he traveled during World War II as a war correspondent and accompanied the allied forces upon their arrival into Berlin — took with him, as loot, one of Adolf Hitler’s telephones.

He was the one who set the first stone

As well as the antepenultimate

Had not yet changed his name

Those were the days of the First World War

Those were the nights of the Second World War

He came down from his ivory tower

To all forms of dimwitarianism

“Do you want to know how the first lab work appeared? It turns out that I was looking for a book in the library, and, well, you know, the book I seek is the book I don’t find…. I must have been looking for Aristotle’s Poetics or Hamlet. Who knows. And, you see, I was looking and looking and instead of finding a book I found a baby bottle. A baby bottle! With milk in a calamitous state of putrefaction. And the nipple, idem, in a bad state. Someone had left it there! Well, immediately when I saw this, I experienced a horrible sensation. And in an automatic, spontaneous way, a name for this baby bottle occurred to me: “la mamadera mortífera”(this phrase means literally “the baby bottle that is deadly” – translated formally for this exhibit as “The Mortal Milk”)… It’s that the word “mortífera” (“deadly”) here with “mamadera” (“baby bottle”) produces a very special effect. It is a contradiction unto itself. The baby bottle is the great love and obsession of children. And it becomes deadly because the milk is sour. And for another reason that is even more powerful — because at that time people spoke of even mother’s milk being contaminated with DDT, the pesticide. So in this way a number of things come together. And, of course, it is situated in the context of the period when the artifact came to be… I did that thing and I got really into the idea…” (Nicanor Parra, 1998) 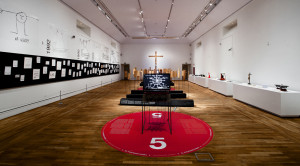