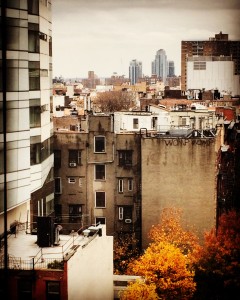 I am not the most skilled at Twitter, and I have my reservations about participating in a sport that feels like high school all over again, but the concision of a tweet appeals to my lyrical sensibilities. A challenge, like a haiku.

I felt the impulse to tweet the evening of Sarah Ruhl’s play Dear Elizabeth, which I attended with Maggie Nelson’s The Argonauts in hand — to read before each act began. I wanted to highlight the triangulation of two texts coursing through the mind of one reader/listener/viewer (me). We do this kind of triangulation all the time.

Here is a draft, a draft of my tweet with bluets: 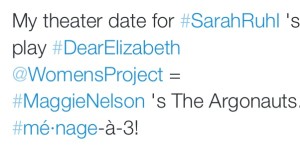 It’s reassuring to me and my Twitter skittishness that neither Maggie Nelson nor Sarah Ruhl have Twitter handles (hence the hashtags instead of the @_____).

And, with the above draft in mind,  a ménage-à-3 of voices:

Lowell: I seem to spend my life missing you!

Bishop: I love my poem–and you, too, of course…

“I don’t even want to talk about ‘female sexuality’ until there is a control group. And there never will be.”

I invite you to read Maggie Nelson’s book alongside Sarah Ruhl’s play if you can, and remember that I was the one to make the suggestion.

You won’t regret it. 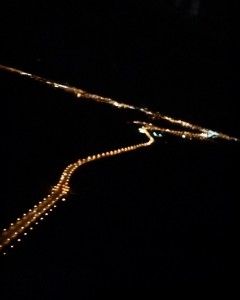